The Mercia memory consists out of three types of memory: 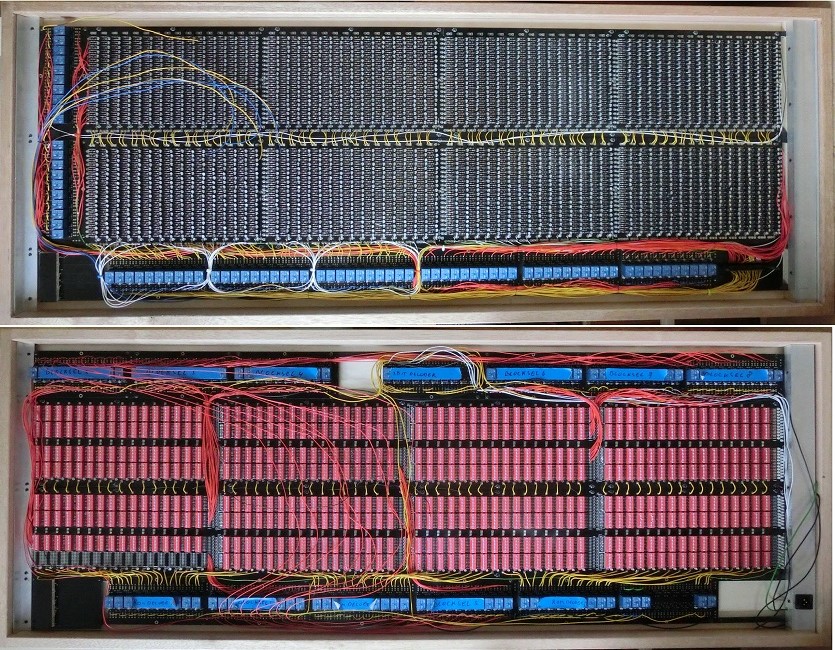 The format of a memory address is: t ccc pp bbbb

The above combination of addresses and banks leads to the following memory mapping.

There are three commands for the memory:

1. clear the memory (not applicable for ROM);

2. write the memory (not applicable for ROM);

The computer does not know what memory it is using, so the memory control is exactly the same for the three types of memory. The control timing is given in the next figure: horizontal the signal lines, vertical the actions.

The reason that a clear operation takes longer than a read operation, is that the RAM capacitors need to empty themselves over the diodes. Since the diodes can only handle about 75-100mA, it takes a while. The much faster relay I/O memory suffers from this restriction for the RAM. The ROM cannot be cleared or written, so these operations will not have any effect.

As described in the elements section, A Read Only Memory (ROM)  can be seen as an universal coder. It uses dipswitches for encoding and LED’s to show address input and data output. For the address decoding, bits 0-5 are used, for the bank decoding bits 6-9. So the complete 9 bit memory address is split in two parts.

Below a circuit diagram for a reduced size memory with nine three bit words. However the 512 byte memory works exactly the same.

For the capacitor Random Access Memory (RAM) memory the TIM-8 memory design from Rory Mangles is used (see: www.northdownfarm.co.uk/rory/tim/tim-8.htm). In this design capacitors are used to store the bits. Each capacitor holds enough power to switch a relay on for a very brief period. However this is enough to store the bit in a memory register.

The capacitors will hold the charge (logical 1) for several hours, but will lose them in time due to internal leakage. When longer times storage are needed, this can be solved by the creation and use of a ROM subroutine that will refresh all the RAM memory cells.

The design of the RAM is very straight forward. Decoders are used to address the memory cells and select one of the eight memory banks. For clearing the memory, relays and resistors are used. For every memory address a relay is used to make a distinction between reading and writing the RAM memory.

The relay RAM is used as a so called zero page memory to facilitate I/O. It is accessible via two routes: the data- and address bus as all memory does but also directly by the I/O device. Per bit two relays are used, one to store the bit and one to select the bit for reading and writing. Per memory word two relays are used to clear the word. One to switch the power off and one to select the first relay for clearing. Below a circuit diagram for a reduced size memory with three three bit words.

The computer treats the memory as if it is one 1024 bytes integrated memory. This is because the instruction decoder with the microcode ROM does not allow conditional processing. Therefore hardware needs to distribute addresses and control signals between the three types of memory: the memory control. This is also beneficial to reduce the power consumption of the computer. The circuit diagram of the memory control is drawn in the next figure. 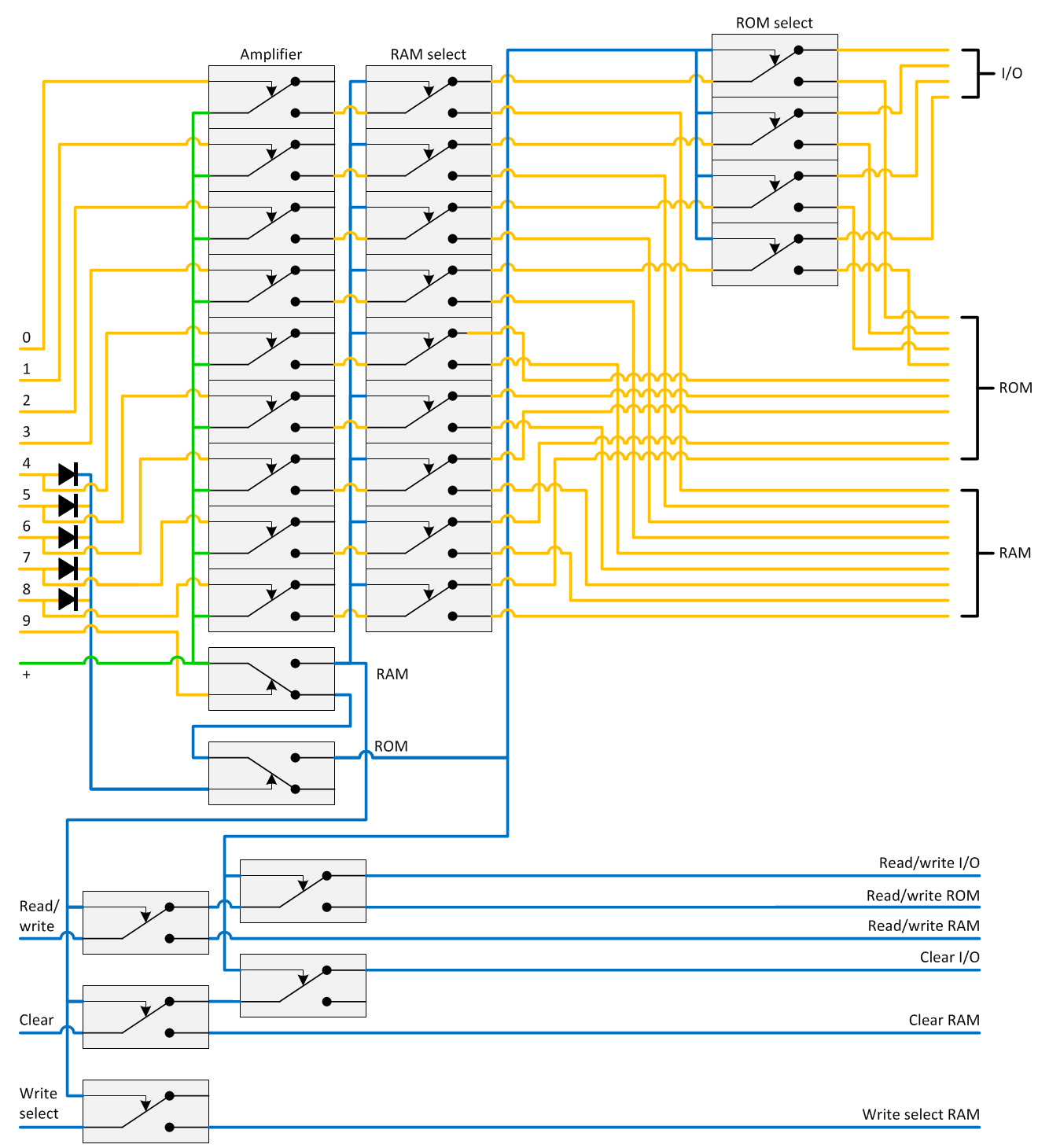 Bit 9 of the memory address distinguishes between ROM (0) and RAM (1). If bits 4-9 are 0, the I/O memory is addressed. Those two conditions make it possible to guide the memory address to one of the three types of memory (top of the circuit diagram). The bottom part of the diagram distributes the control signals to the right type of memory. Not all the control signals are needed for each memory type. For instance the ROM does not need clear or write select signals.

MERCIA in a nutshell

Aline Brinkman
for the painting of all the woodwork and panels.

Frans den Boer
for his never ending help with PCB designs and mechanics.

Rory Mangles
for his RAM design.